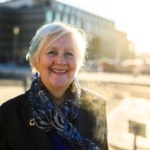 Vala is a WEAll Ambassador, member of the WEAll Global Council and leader of WEAll Iceland. She is Professor of Sustainability Science at the University of Iceland.

During my summer vacation in 2018 in the Norwegian mountains I read the Nordic Secret by Lene Rachel Andersen from Denmark and Tomas Björkman from Sweden.  The subject of the book was an eye opener for me.  Despite being from a Nordic country (Iceland) I was not aware of the history and social development in the Nordic countries during the 19th century.

Andersen and Björkman demonstrate in the Nordic Secret that when enlightenment came to Copenhagen around 1850 (a century after enlightenment in central Europe) salons were held (mostly by women) and new ideas from Central Europe were discussed.

Unlike Central Europe where the ideas were discussed largely by the ‘intelligentsia’, in Denmark salons were held with a wide participation. Then „folk“ high schools were set up for the children of Danish farmers.  First only young men came to the schools, usually set up by men with their wives – where everyone lived together and discussed new ideas together.  Later young women were also welcomed.  In the „folk“ high schools they discussed new ideas pertaining to philosophy, farming, craft etc.  Everyone lived together, cooked and cleaned, did chores on the land.  No exams were held.

The young people stayed for 3-6 months and then went home to participate and later take over their parents farms – with new ideas in mind.  They were no longer only proud of being farmer children, they were proud of being Danish. This was the foundation of the farming industry in Denmark and the Scandinavian design which is to this day notable.  Later „folk“ high schools were opened up in Norway and Sweden and to a lesser extent in Finland.  By the end of the 19th century there were hundreds of „folk“ high schools in the four Nordic countries. Though no such schools were opened up in Iceland, some of the new ideas came to Iceland with men that had studied in Copenhagen. Of interest is that the „folk“ high schools were set up by clergy and the general public in Denmark, teachers in Norway, the intelligentsia in Sweden and women in Finland.

Once the young people were back on their parents’ farms they were instrumental in founding and supporting co-operatives.  The cooperatives were at the centre of each community, and fostered the building up of libraries and discussion groups.

What was different with the Central European enlightenment was that it largely only affected the intelligentsia.  In the Nordic countries it affected the whole population.  The „folk“ high schools were thus the foundation of the Nordic countries as they are today with their admirable and enviable (proclaimed by many) welfare- and social democratic societies with social justice, universal health care and education at the core.

What is suggested by Andersen and Björkman at the end of the Nordic Secret is that we need to continue with the ideology of the 19th century – where the Bildung of the Nordic population took place (the German word Bildung means more than education – it also is rooted in culture and aims at widening peoples’ horizons). They proposed that Bildung 1.0 occurred from 1850-1900.  Bildung 2.0 took place in the 20th century – and that we now need Bildung 3.0 – with the aim of raising everyone’s horizons to care for humanity as a whole, the Planet and future generations.

I wholly agree and therefore I started to have salons in my living room in November 2018.  Once or twice a month anyone interested can meet in my living room to discuss new ideas with the aim of raising everyone’s horizons.  We read books together and discuss their content.  So far we have gone in detail over the Nordic Secret, in addition (but in less detail) Spiral Dynamics (by Beck and Cowan) and Integral Meditation (by Ken Wilber).  The two latter books outline the evolutions of thinking (Beck and Coward) and the need for the simultaneous development of thinking and states of consciousness (Wilber).

The next book we will discuss is the latest book by Andri Snær Magnason (About Time and Water), which was published in Iceland in early October – but is currently being translated into more than 20 languages.  It is about the climate crisis – and why we find it so difficult to get our heads around the issues at hand.  I recommend that everyone look for this book when it comes out in their language. Magnason is a master in putting complicated issues into words that everyone can understand.