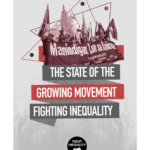 The below is the introduction to the report ‘The state of the growing movement fighting inequality‘. reposted from the Fight Inequality alliance

In the 21st century so far, levels of inequality within and between countries have been rising. The neoliberal economic system has enabled an explosion in the concentrations of wealth and power in our societies: 26 individuals now hold the same wealth as the 3.8 billion poorest people.1 Interconnected and systemic forms of oppression and inequity such as racism, patriarchy and homophobia shape the daily realities of the majority of the world’s population.

Rising authoritarianism is fuelled by growing inequality and concentration of power. It is resulting in attacks on freedoms and protections on assembly, association, and speech— rights that peoples’ movements exercise in order to organise and influence action—as well as the enhanced targeting of particular marginalised groups and minorities by many regimes.

This study was conducted in response to the evident gap in existing research on inequality, which has to date has focused on tracking and analysing its rise in different forms. Much less attention has been given to the analysis of campaigning and organising against inequality. This research aims to widen and deepen our collective understanding of movements fighting inequality around the world.

The research findings are based on 138 responses to a 30 minute survey and over 40 in-depth interviews conducted between 2018 and 2019 with people in 23 countries across Africa, the Americas, Asia and Europe.

4. The paradox of business ownership