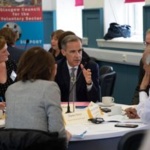 Lisa Hough-Stewart of the WEAll Amp team and WEAll Scotland team recently attended a community engagement event with Mark Carney, Governor of the Bank of England, organised by Glasgow Council for the Voluntary Sector (GCVS).

This was a great opportunity for the Governor to hear how economic policies and realities are being felt by the most vulnerable people and communities in Glasgow, and for attendees to learn more about the purpose and work of the Bank of England. Lisa was pleasantly surprised to hear from Carney that the objective of the Bank is to “promote the good of the people” as well as his recognition that we are in times of serious change. It is encouraging that he is undertaking this series of community and citizen engagement events, which demonstrates a real willingness to understand the lived experiences of British people.

Lisa took part in a spirited table discussion with fellow charity/non-profit representatives, which covered basic income, lack of dignity in the welfare system, the lack of hope in our current system for people living in poverty, and the trend towards insecure work that fails to offer meaning and purpose.

“The UK has become stuck in trying to meet the needs of its people because we are using 19th  and 20th century thinking, systems, concepts in responding to 21st century issues. We’re not facing up to  21st century conditions – changing demography and its impact on people and communities; lack of social mobility; changes in the labour market; increasing social isolation; the impact of social media; and the wider digital revolution …and climate change.

We’re never going to address these effectively if we stay as we are – in silos and comfort zones. Our decision making is slow when it needs to be fast; our systems are clunky when they need to be flexible; our public institutions are risk averse and uncertain when they need to be solutions focused, confident and assured.”

Watch the summary video of the event below, including a clip of Lisa talking about WEAll, and read more here.